Pinki Kumari’s life has not been without its challenges. Staying in school meant overcoming financial and societal barriers. She lost her husband at a young age and struggled to support herself because of cultural and religious restrictions that limit her mobility as a woman in India. Against all odds, Pinki not only dared to find her own voice, but found her passion in helping others find theirs.

Today, Pinki is a project officer for PRACHAR and JAGRITI, two Pathfinder initiatives focused on improving health and wellbeing of adolescents and youth. She advocates for adolescent sexual and reproductive health, working to prevent early marriage and to provide the best information on sexual and reproductive health to adolescents in a cultural environment that considers such topics taboo. Daring women like Pinki are at the heart of Pathfinder’s work around the world.

Pathfinder’s Jaime-Alexis Fowler recently spoke with Pinki to learn more about her incredible story, the women who inspired her, and why she thinks local and global progress depends on the world’s youth. 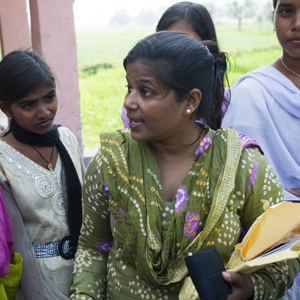 I remember my first day of adolescent reproductive and sexual health training at Khiri village of Gaya District, where I met with around 40 girls, aged 15-19 years. Fifty percent of them were married and had no information on their sexual and reproductive life.

We asked some questions related to sexual and reproductive health: when to marry, when to have a first child, what is family planning, have they seen condoms or any information on contraceptives.

They started laughing and feeling shy. Some of them were very adamant that they did not need this information at this time.

After a few minutes of counseling, they agreed to take the training. On the last day, some of the girls started crying and said that they were in the dark and only presumed the fantasy of married life, but this training had opened their eyes. They also said, “My past was not in my hand, but my future is in my hand and I will not allow anybody to take my life decision. I will counsel my husband to delay our first child until we are in a good position to take the responsibility of our family life.”

This is not a one village story. Wherever we imparted adolescent reproductive and sexual health training, I got similar responses.

PRACHAR and JAGRITI dared to positively change the mind-set of youth and gave them voice to speak up for their rights, their community, and their sexual and reproductive life as social change agents.

What inspired you to start working on adolescent issues?
After completing my graduation, I joined a chartered accountant group to support my family financially so that my siblings could continue their education. But I was not enjoying my work. In between, I married into a very orthodox family where women were not allowed to go outside alone. We have a ritual called Gauna, or second marriage, in which the bride lives in her parents’ home and after a few years she will return to her in-laws’ house. In Gauna, the bride’s parents have to give gifts to the bride which is quite costly. My parent’s financial condition was not good, so I decided to start my work. I was in search of a job and one of my friends informed me of the PRACHAR trainer’s interview.

I qualified for the job, but was challenged by a five-day training of trainers in order to become an adolescent sexual and reproductive health trainer without any past experience on the issue. I took the training and qualified. Before going to field, I went to my in-laws’ house to share my news, but I did not get chance to meet my husband again. He was killed by his friends.

When I went to field and interacted with the girls, that whole day I forgot what had happened with me. I was seeing all of these girls instead of me and I began to get my confidence and hope back. I thought that there are so many girls like me and boys like my husband and my brother who, due to society and peer pressure, have a misled life. This training can be an eye-opener for those girls and family who believed that marriage is the solution for all social remedies.My dream was broken down. I was feeling like a culprit whom god has punished in this way. Due to my bad health, my in-laws sent me back to my parents’ home. I contacted PRACHAR to join their work. Some of the office staff, especially Mr. Binod Bihari Singh, advocated for me and office agreed to give me one more chance. I was so depressed and always asking, “Why has this happened to me?”

It’s easy to assume most gender equality work focuses on women’s rights. Have you seen evidence of cultural practices hindering boys’ progress in your community?
We have three sisters and one brother in my family. I have seen very closely how my brother’s whole life was affected [by societal pressures]. My mother always gave him the best care in terms of food, clothing, schooling, and others. Why? Because she always used to tell him that he has the responsibility of caring for three sisters. He has to make sure we get married. We all took care of my brother because we saw him like the soldier of my family who will give us a good life.

We never realized the pressure put on him. We never realized his dream and we snatched his childhood from him, wanting to make him a man as soon as possible. He was a very bright student with many friends. My father was very strict person and for small mistakes he used to beat us badly, especially my brother. My brother always tried to stay away from home. After completing ninth standard, he started skipping school. My mother tried to counsel him, but she didn’t share this to my father because she was scared that he would beat my brother badly.

One day, we came to know that he started using alcohol and other drugs. It was too late to stop him, because he had already become addicted.

This is not just the story of one family. You can see these stories very often in our society. Girls are seen as a financial burden for their families and boys are nurtured to share the responsibility of their parents as soon as possible. Decisions such as when to marry, with whom to marry, the number of children to have, the use of family planning, the option of abortion, and whether or not to continue education are taken by elders or parents.

These norms or practices need to be change and boys and girls should make their own decisions, not forced or influenced by anybody else. Due to my family and my husband, I realized that adolescents need somebody who can show them the path to walk safely and make independent decisions.  So I devoted my work to adolescent and youth and started searching for a platform where I can serve them.

What changes have you seen in sexual and reproductive health work since you joined PRACHAR?
Yes, six or seven years back, the media, social organizations and the government were not paying attention to this issue. But today they are trying to work on this issue. Youth and adolescents were not their target group because there was a common thought that talking about sexual issues among adolescents would encourage them to have pre-marital sex which is not acceptable in Indian culture.

Only focusing on girls’ empowerment is not enough. Focusing on both [boys and girls] is very important because they both need to grow equally. Both are deprived or discriminated against in different manners. In case of my brother’s incidence, I realized that he was also a sufferer of gender discrimination. Too much family pressure and burden misled him.

Do you consider yourself daring for focusing on adolescent sexual and reproductive health issues?
Of course, yes. I saw youth as a pillar of our future which needs to be built strongly so they can take the responsibility of their life and society as well. I believe that investing in youth and empowering youth is more cost effective than any other program. I have empowered so many girls and boys through PRACHAR trainings and the JAGRITI platform, [helping them to] lead their lives and become role models for their society.

Have you been inspired by other women in your work?
Yes, first of all, my mother, who dared to break the society barriers that are not in the favor of our education. She fought with her in-laws to allow us to complete our education [before marriage]. She did not take any help from them. She started working and sent us to school.

Give the decision-making power to youth and empower them to lead the world. They are not useless, they have been used less.The second lady who inspired me was Mrs Poonam Sahi After completing my 10th standard my mother told me that she can’t afford my education any more. I started making henna tattoo work and one day Poonam Sahi called me to do tattoo work on her hand. She asked about my schooling and future plans. The next day, she called to my mother and gave her Rs. 700 for my college admission and said to my mother that I shouldn’t be forced to marry yet and to let me complete my education first.

The third women to inspire me was my school principal, Kalpna Verma. She was totally devoted to girls’ education and always inspired us. She used to tell us education is the only weapon that will give you the confidence to fight for yourself. She gave us literature and books on women. I always used to read biographies and my favorite biographies were about Tarabai Shinde, Taslima Nasreen and Tehmina Durrani. I respect these women’s struggle in different ways and they always inspired me to fight for the right things and [taught me] to respect my dignity.

If you had one piece of advice for someone interested in changing the world, what would it be?
Give the decision-making power to youth and empower them to lead the world. They are not useless, they have been used less.

This post is part of Pathfinder’s “Women Who Dare” series in celebration of International Women’s Day 2013.

When Time Is Running Out, Who Can Help?

Peter and Doris had already lost two pregnancies. Would they ever be parents?...
read more